This help describes the overall structure and architecture of websites created by GenHelm. Consider the following diagram. 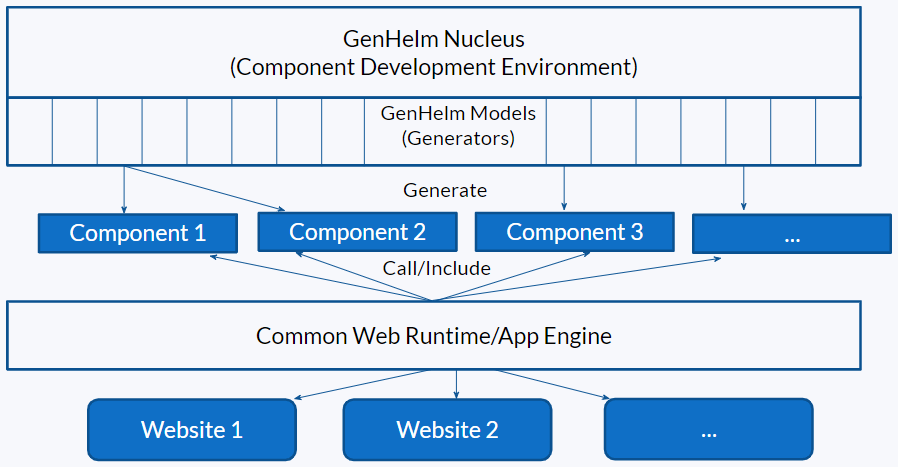 In the following sections we describe the various components that make up the architecture.

The GenHelm Nucleas is the engine that facilitates component generation. The nucleus does not really know or care what is being generated, it simply provides services to model components which are responsible for determining what to generate.

The GenHelm Nucleus also encompasses common user interface behaviour via the command line interface. When users (web developers) enter commands, such as stow, edit, delete, etc., these commands are parsed and interpreted by the nucleus. In some cases the command can be handled directly by the nucleus while in other cases the nucleus invokes methods of the current model to handle the command.

Unlike most generation tools that treat generation as a one-shot technique for creating code to be maintained by hand, the GenHelm models are used continuously to maintain components throughout their lifespan. In this sense, models are like highly specialized editors that can read and write component specifications.

The components generated by the GenHelm models together determine the look, feel and content of the website being run by a common web runtime. These components encompass all of the assets in a typical web application including:

Generated components never need to be manually edited outside of the GenHelm environment. In most cases, this is something that should be avoided since any changes made to the generated source will be lost if the component is regenerated within the GenHelm environment. Nevertheless, there are a few models that can accommodate changes that are manually applied to the generated source code. For example, models that generate PHP classes are able to pull in altered code from the classes themselves so that changes made to the code are preserved upon regeneration. This is particularly useful because it allows you to make code changes while operating within the context of a php debugger without losing your changes when you regenerate the class components.

The Common Web Runtime facilitates the rendering of web pages by calling upon components to provide content and structure. The runtime, itself, does not determine what the web pages will look like nor how they will interact with the web visitor. The runtime is typically launched by an HTTP server such as Apache or IIS.

One of the benefits of this common runtime is that the same set of code can support any number of websites. That is to say, there is no need to replicate or copy this runtime each time you launch a new website. Each website can be defined as an subdomain under the same account so that all websites can share a single instance of the runtime. Production versions of your sites (that require a dedicated domain) are typically defined using add-on domains so that they can easily share the common runtime under a shared account. Nevertheless, it is also possible to define these under a dedicated account while using symlinks to point the the common runtime situated under a different account.

You will notice that the word "common" is used throughout this document. It is important to distinguish between two meanings of this word. Common can mean typical or commonplace. This is not the context of our reference to this word. In fact, it is quite to the contrary since the architecture shown here is actually very distinct and unique.

The context of common in our description closely aligns with the word "shared". Sharing and reusing code is one of the most crucial aspects of underlying quality. If most of the code used by your website is also used by thousands of other websites you can be confident that this code has been well exercised and tested in the real world.

In a similar way, code generation also leads to extremely high quality solutions. Humans make a lot of mistakes, especially when they are doing something for the first time. Generators, on the other hand, produce code in a very controlled way. If a generator produces code that it incorrect it is possible to correct the generator (model) so that this mistake never happens again. In this way, the models are constantly improving and becoming more and more robust over time.