All forms on all GenHelm-built sites are processed using a common form management framework. This ensures that all forms will be processed consistently including handling for all important form functions such as field validation, upload and email support, reCAPTCHA handling, responding to buttons, et cetera.

Forms are page-oriented models so they can be used to render pages in their entirety. Alternatively, forms can be rendered as components of other pages or as part of a layout by referencing the form within a $page function. Forms can be built in sections which can be combined or nested to create larger forms. Forms can also be used as the content to be sent within contact emails.

Here we show the form definition used to build the order page on this site. Colon (:) introduces a field and double colon (::) will be substituted for the label attribute of the adjacent field. In this example, there are three other form definitions that make up the complete form; these are referenced using $page functions. 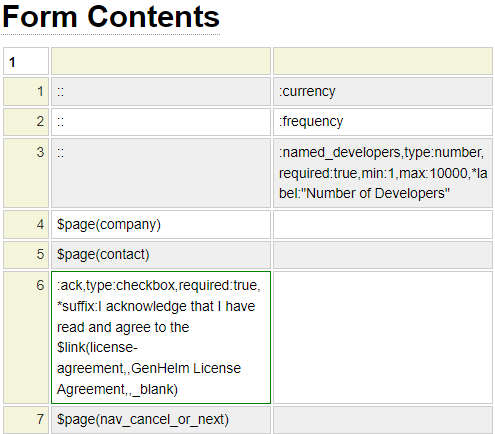 Notice, in the form definition above, there are no details shown for fields currency and frequency. This suggests that these fields have been predefined using the html_field model. Here we see the definition for the currency field.

Forms can reference other generated components such as form_handlers and transactions as shown here: 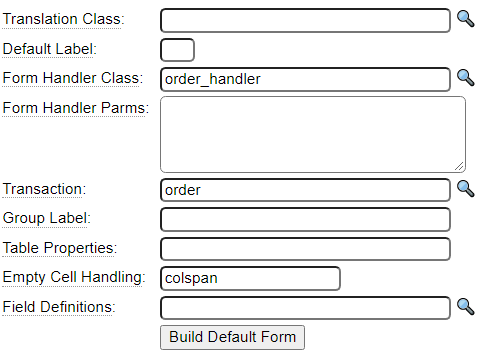 Form handlers are not needed for simple contact forms, for which you only want to send contact details to a site owner via email. Form handlers interact with the form to handle validation and business logic. Here we show the post method of the form_handler associated with the order form above.

Here we show the transaction model specification associated with the order form above.

Notice that there are two pages referenced as part of this transaction; the order page shown above as well as a checkout page. The transaction object handles the navigation between these two pages.

Here we show the definition entered in the mailform model to handle the sending of emails. 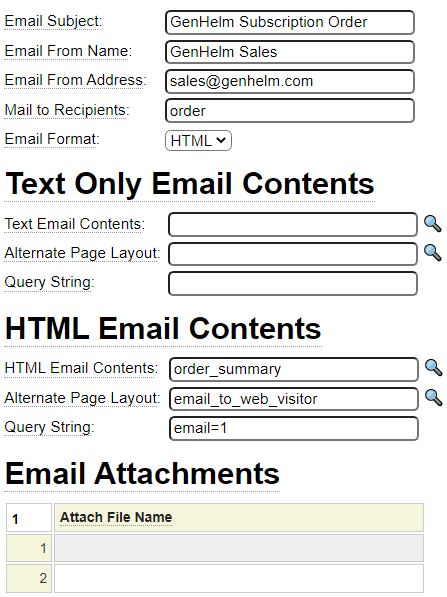 Follow the links below to learn more about the models described above as well as other models that are used to help you build and process forms.